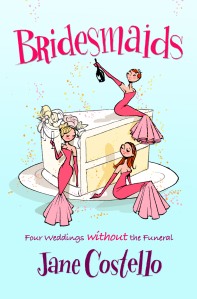 Book Description:  With less than an hour to go before her best friend, Grace, is to walk down the aisle, Evie is attempting to fulfil her most important bridesmaid role: to deposit the bride at the start-line at the appointed time. But with a bride famed for her chaotic sense of time, and the bride’s daughter busy mashing Molton Brown into the expensive hotel carpet, minus underwear, the odds are stacked against her …At least she has her new ‘chicken fillet’ boob-enhancers to make her feel special. That is, until these are spotted poking over the top of her dress. So spotted by Jack – the most ruggedly attractive man Evie has ever laid eyes on. Evie is twenty-seven; a sparkly, down-to-earth journalist. She has never been in love and has started to fret that she never will be. Small wonder, then, that the prospect of being bridesmaid at no less than three impending weddings is one that fills her with trepidation. Things get worse when Evie learns that Jack is her friend Valentina’s date. Valentina is beautiful, shallow and self-obsessed. Her dates tend to be mirror-images. Which can mean only one thing: Jack can’t possibly be as good as he seems.But as they sit together talking late into the night, Evie finds herself yearning to believe he’s all real.

I picked up the paperback of this book at the Spring bloggers event i attended in March (see previous post). I thought I had read some of Jane Costello’s books before but now I am thinking I haven’t – this is where a blog comes in handy to keep track of what I have read! I have had this book on my kindle since last summer though on my “to read” list! (maybe if I didn’t sleep for a month I could clear the backlog of reading…)

So, firstly, this book isn’t the book of the film “Bridesmaids” – let’s clear that up! The book opens at the wedding of Grace – the first of 4 weddings – where Evie is going to be bridesmaid for her best friend. Evie is dysfunctional when it comes to relationships, she just can’t settle down.  The book moves us through Evie’s life as she carries out more bridesmaid duties and keeps on meeting the rather delicious Jack at all of the weddings.

Along with Evie’s inability to settle down in a committed relationship, the book also explores – very subtly – the changing dynamics in friendships when some of the friends get married.

I loved this book, it had some very funny moments – the hen night/handbag moment being one of the funniest! I visibly cringed when i read that part! and it also had some very moving moments. It made me want to phone my girlfriends to check they were ok (then i remembered that it is 2015, and we now text not phone!).  The book is very well written and the characters are all likeable, even the ones you are supposed to hate! We all have a “friend” like Valentina – although maybe she is the magnified version! ha!

Really easy read, great for a plane/train journey or a Sunday afternoon on the sofa – or for that poolside read!