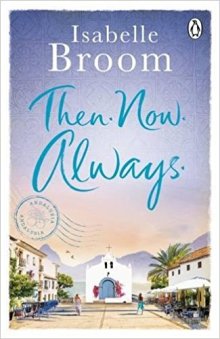 Hannah can’t believe it when she’s offered a trip to sunny Spain with her best friend and dreamy boss . . . what’s the catch?

Twenty-eight year old Hannah is ready for an adventure. She and her colleagues are in Spain for a month to film a documentary, and it’s a dream come true. Not least because Hannah will get to spend long summer days with Theo, her boss (and crush). If only Tom (Hannah’s best friend and cameramen) and Claudette (the presenter) would stop getting in the way…

Then things become even more complicated when Nancy, Hannah’s half-sister arrives. What on earth is she doing here?

For once in her life, can’t Hannah just have one perfect summer, free of any drama?

Picture the scene. It’s a grey, dull March morning. It’s windy, it’s been drizzling on and off. “I know”, I think, “I’ll start Isabelle Broom’s new book!” Within 30mins of starting, I could feel the warm sun on my skin, I could smell the suncream (Nivea, if you’re wondering!), I could see the dazzling white from the buildings in front of me! Isabelle has a wonderful knack of transporting you to these wonderful, real, foreign places. Her passion for travel shines through in each book she has written, her books are like written photographs. Mini travel guides. I loved this book! I also spent a good 10 minutes googling Mojacar and Indalo Man!

The book sees Hannah, a 28yr old TV researcher, asked to scout a location for a film her company are making about Myths. She remembers her own childhood holidays, with her best friend Rachel, in the Sunny Andalusian town of Mojacar – no, that’s not Majorca spelt wrong! She pitches the idea to her boss and in a few short weeks, she is asked to be part of the team of 4 on her first ever location shoot with her gorgeous boss Theo (who she has the teensiest of crushes on!!), French presenter Claudette and her best friend Tom. What could go wrong?

In Mojacar, Hannah meets a lovely ex-pat called Elaine and we learn her back story along with some of the history of the town. We also see Hannah fall in love (and not with who you might think), over come her fears and become the woman she was always destined to be.

I have 4 sisters myself (1 of them is “step”, 2 of them are “half” but me personally, I hate those pre-cursors – my sisters are my sisters!) so it was interesting to see the relationship between the two half sisters develop. A few of the things that Hannah feels and says really resonated and struck a chord with me.  It was also nice that where was a cameo appearance from Isabelle’s last book A Year and a Day – I won’t say who, when or why but you’ll know when you get there!  I’m hoping that thread of the story is setting up a cameo for the next book?

This really is a lovely book and I can not recommend it enough! It’s a fab summer read – one to read in the garden or on holiday – but also would make a fab winter read to make you long for the summer and escape from the dull dreariness of Britain!